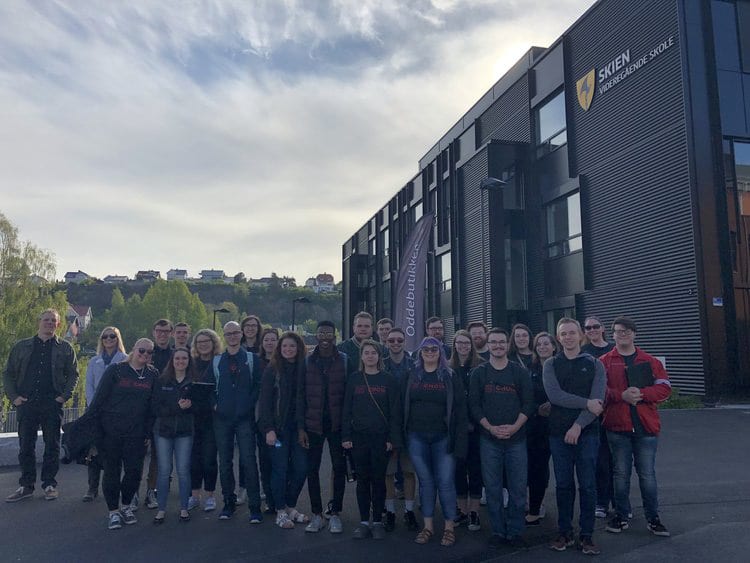 I’m splitting this day into two sections because today is such a full day for us. We were exhausted from the traveling yesterday, so most of us slept splendidly. We woke to a Norwegian breakfast buffet that had something for most any and every one! Eggs sunny-side up, croissants, danishes, baguette, even sea-food including smoked salmon and shrimp, fruit smoothies and a myriad of things that made our three-concert day seem less daunting.

Today, Stig Sjøstrøm, was our fearless leader. He is the Telemark County Arts Representative that is in charge of all public concerts featured in the area including Skien. He also teaches percussion at the Skien High School. He came to our Hotel at 8am to lead us to the high school for a morning that was to to be full of singing, masterclasses, and a concert.

We were introduced to Anne Lise Sydnes the conductor of the Skien High School Choir who took the Minot State University Choir to rehearse Dalikopen by Bjørn Kruse, whereupon I took her choir and rehearsed the famous James Erb arrangement of Shenandoah with them. Working with the 60 Skien High School choristers was renewing. Just being around their enthusiasm, zest for life, not to mention immaculate English speaking, was inspiring.

Here are some pictures:

After rehearsing with different directors we joined forces on the two pieces we planned to perform together which was just pure fun! Then we each rehearsed pieces that we wished to perform for the school during their lunch hour in their gorgeous lunch/concert/open/arts space. We rehearsed Craig Hella Johnson’s arrangement of Hard Times, and then Joseph Gregorio’s hilarious and challenging arrangement of Frog Went A-Courtin’. Then with a handful of minutes left before the concert the choristers all got to mingle and get to know each other. The ease at which this all happened is a testament, I think, to the delightful members of both choirs, but also the unifying power of choral singing. After we had finished singing with each other, our conversations were earnest and vital, as if we were catching up with long-lost friends.

I’m so thrilled with our performances tonight at the Gjerpen Medieval Church. We shared a concert with Con Vocale today under the direction of Cedomir Popadic, and with the Skien High School Choir under the direction of Anne Lise Sydnes. The concert was so thrilling on all counts. Absolutely brilliant singing from the fabulous Con Vocale under maestro Popadic with an absolutely searing version of Hvad set du dog skjon from Grieg’s famous Four Psalms. The Skien High School choir under Anne Lise Sydnes, was electric, and spirited and with excellent tuning and lovely core to the sound! The Minot State University Choir sang absolutely splendidly, with call-out solos from Rose Bateman, Maddy Sem, Kaylee Capp, Arnikka Thompson, and Sydney Johnson.

There was also an unexpected surprise! We were taking a choir picture outside this gorgeous Gjerpen Church, when a man approached and asked if there was a Michael HarriSon in our choir, which of course prompted Michael to sheepishly raise his hand. The man proceeded to tell us that he not only was the pastor here at the Gjerpen Church, but that he had gone to seminary with both Michael’s mom and dad in Illinois, years earlier. (See the bottom of this entry for these pictures)

The most beautiful thing tonight, for this participant, was when we combined for performances of James Erb timeless arrangement of Shenandoah, and Dalakopen by Björn Kruse. While each group had great musical moments, the sound of us all raising our voice together was a sound that I shall always remember. The reason we are here in Norway, is in large part due to the desire of so many in Minot to link arms with their Scandinavian brothers and sisters, creating opportunities that would otherwise be out of reach. This desire for connection, came through in the sound today. The music wasn’t perfect. But what was perfection was the connection of 150+ voices raised in the commonality of a love of music, a love of shared traditions, and the desire to connect and share.

Here is a video of the performance with the combined forces of three choirs in a church that was consecrated in the 12th century:

After this we went back to our hotel for an official dinner with the Mayor of Skien, our own Minot Mayoral delegation, and we were able to share an a cappella version of the Skien City Song and have our new Norwegian friends join in with their own beloved song. Here is that collaboration:

We found that tonight our own gifts were augmented by the newly formed friendships and connections, the long shared history, and the efforts of countless people who not only just shared in our opportunity to come here, but laid the foundation for a long, robust, and rewarding relationship between these two cities. It was a long day, but a day none of us who sang will easily forget!